Sometime in November of 2005, we received a 100x60x30cm tank as a gift. For a few weeks, it stayed on the floor waiting to be filled with water and fishes.

On the second week of December, hubby took home a silver arowana from Hornbach, a hardware store. I didn’t even know they sell fish there! It was 40euros.. =(

Markus (arowana’s name given by a friend) was about 5 inches then. He was alone in the tank for some time and he looks so bored in it. So we gave him 3 apple snails as companion.

The snails stayed with Markus for a short time because the naughty fish played with them a lot…tossing them while crawling or maybe just smelling them, lol. We later recieved another gift, a Plecostomus about 15 inches from nose to tail. Both the tank and the Pleco were given in gratitude to hubby fixing computers!

Markus has gotten bigger by time, he is now 14 inches long! Still always sad-looking though.

An austrian friend once said that this is the saddest looking fish he ever saw. lol.

As a last installment, here are our oscars.

Hubby received 8 from a friend but I think he paid about 40euros for them, there was one albino and the rest were orange/brown but without the dots. Too bad the tank was too small that they quarrelled and 3 died soon. To date, we only have 3 remaining Oscars.

Our son Daniel has always been fond watching them, ejoying it even putting his hand for the fishes to tickle! 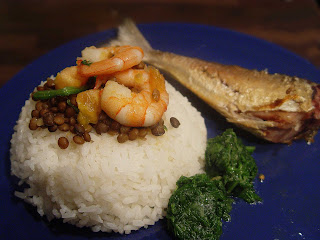 A Photo each Day – Food