I know, why just now write about basic rules when I have been posting photos since I started blogging. This is for you my dear friends who have the passion in photography and in some way have been sending me messages letting me know that they enjoy my photos, asking me for tips or asking about the best type of camera and for liking my photos whenever I post them on facebook. 🙂 I hope these tips help you through your new found hobby.

You might ask, on what authority do I have the rights to share thess tips? I am not an expert and I don’t have that big of a portfolio to show. I just wanted to share. But if it matters, I’ve been taking photos since 1999, back then with a Canon T60 and at times a Nikon FM10. I process black and white films using the method I learned from a colleague, now film director Treb Monteras. He also thought me how to print photos and gave me useful tips about composition, iso, aperture and bokeh that proved handy throughout my shoots. After mastering a lot of rules and applying tips, I was also able to bend them and eventually created my own style, so to say.

This is a photo of my daughter taken sometime in 2004. (Flickr page says June 27, 2004 to be exact.) Guess what camera I used for this shot! It’s a Sony Dsc505v — a 3.34 megapixel design with an incredibly sharp 5x zoom lens by Carl Zeiss. (I miss that cam, especially since I can move the lens and I can still see the subject on my lcd when I do.)

Back to the photo, you will notice that my daughter is not in the center. I am applying one of the first guide a photographer consider when taking photos, the rule of thirds. It is a compositional rule of thumb also used in visual arts such as painting, design and sometimes in films. The rule states that an image should be imagined as divided into nine equal parts by two equally-spaced horizontal lines and two equally-spaced vertical lines (see image below), and that important compositional elements should be placed along these lines or their intersections.

Well, I flipped the image horizontally and placed it on top of the photo (screened with soft light). Anywhere on those dotted lines is where the subject should be, what we call the point of interest…it could be on one or all four of them. Your subject doesn’t really have to be exactly on the point, close enough is good enough…you can make your subject fall near the intersection of two of the lines and still end up with an effective image.

So next time you shoot consider this rule and forget putting your subjects in the center. You can definitely break this rule but do practice first. 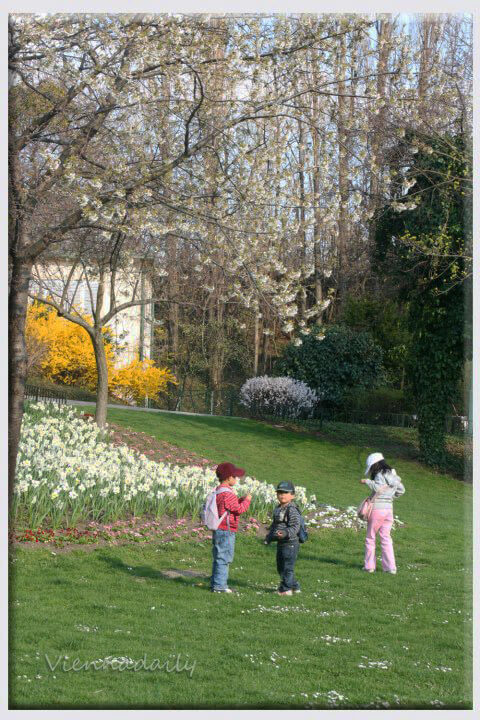 Day 14. friedliebend If possible, as far as it de