Of my three kids, I observed that my youngest was the last to develop well in speech. Every child is different I know, and as the kindergarten teachers say it is not easy for him, since he hears three languages all at the same time when he is developing speech perception. When he turned two I expected that he would somehow construct phrases at the least, but he could only utter syllables in Tagalog, since I never baby-talked him so he can say the words straight and clear.

Since we watch Japanese movies and animes a lot, the little boy was able to mimic a few words and would sing too when he was 2 and 3 months old. He could also say “food words” in tagalog and anything that has to do with eating. Tubig (water), kanin (rice) were his clear words. At one time, he was asking me for something and he kept shouting sakura (cherry blossoms), I absent-mindedly replied “We do not eat sakura here.” He continued saying sakura and pointed at my hand……ahhhh I was holding his kutsara (spoon)!

At 2 1/2 he learned saying “Konnichiwa” with a really cute accent. 😀 He keeps repeating it as though it is his favorite word. Also “shirane” (I don’t know) having heard it from ‘My Neighbor, Totoro.’ The  first phrase (more of a question) that he said in English was “Mama, watchu doing?” followed by a really big grin! I’m not sure where he mimicked or picked that up but I laugh everytime I hear it. The only German word he can say then was “Danke” (thanks).

In September, he finally started saying full sentences in Tagalog, but only in a chaotic order. I would blame the German language because it has a different sentence construction than Tagalog. He would often tell his dad “Ikaw daddy, gulat mo ko, Daniel.” (You daddy, you shocked me, Daniel.)  which hubby and I would laugh about later on. He seems so fond of putting Daniel or I at the end of his sentences. It was when he learned his name and that the baby pictures he would refer to as ‘baby’ was actually him. As a typical kid he started repeating words and phrases he heard with meanings that only I would understand, sometimes though he would only say root words…notable among his favorites were Suppenteller (soup bowl), schön wieder (again), schon kaputt! (broken), hulog ako (I fell down), tulog ako (I want to sleep), kain ako (I am eating).

A Lot To Learn

Now that he has turned 3, the little boy speaks well and his speech has improved a lot. He can now request something by saying a full sentence opposed to just a ‘word’, though he speaks with I still at the end “Mommy, darf bitte Wasser haben, ich?” Lol (The sentence should be Mommy, darf ich bitte Wasser haben?) Or “Gehe aufs Klo, ich.”  when it should be “Ich gehe aufs Klo. ” (I’m going to the toilet). There are lots of room for improvement, I would correct him once and he would follow the sentence I say. Like a sponge dipped in water he is absorbing a lot, I’m happy seeing him learn a lot of words though of course I’d prefer it if he would absorb good manners and a love for the bible too…but this is for the moment good as it is. 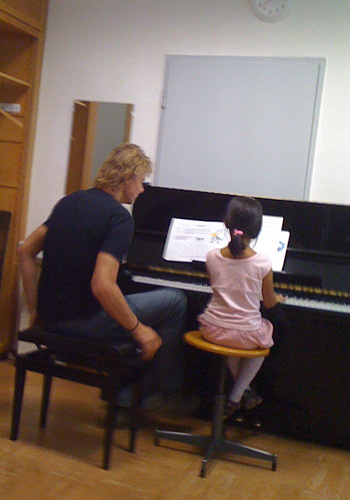